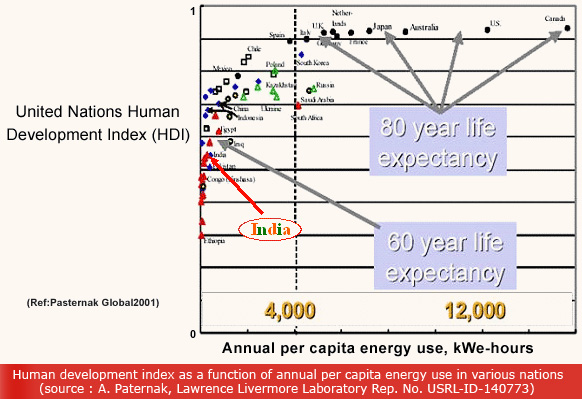 India, the second largest populated nation in the world with more than a billion people has an economy which is growing at nearly 8% over the last decade and about 6% on the average since her independence in 1947. It is expected that India's economy will go at more or less the same rate even till 2050, which will naturally demand enormous amounts of energy. This is also highlighted by the fact that globally, the nations with improved quality of life, as reflected by the larger value of the human development index, consume more amount of energy per capita (see Figure).

Though India is presently the fourth largest electricity producing country in the world, her per capita energy consumption (500 kWh) is rather small, which is only about 1/2 of China , ¼ th of World average and about 1/13th of developed nations. This is also reflected by the low life expectancy in India and other similar nations. However, India aspires to reach at least the global average by 2050, which would require her to produce about 1300 GW of electricity, ten times more than the present value of about 130 GW. Of the present electricity generation, about 80% of the resources is fossil fuels, Hydro about 15%, renewables about 2% and nuclear about 3%.

Relying on fossil fuels alone to increase the energy production is both impractical and impossible, first because of lack of access to required resources and second, even if resources ae available, it would produce irreparable damage to the environment through global warming. The conventional nuclear power production based on fission reactions is slated to grow to about 20% of the total by 2050. To meet the energy demand in coming decades, it is essential to find alternate resources. Thus fusion, which can be viewed as an advance nuclear technology, provides a great opportunity to countries like India and China to meet their energy needs.